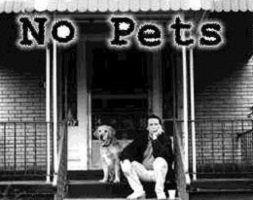 The premiere of No Pets again brought outstanding positive responses. Pittsburgh Post-Gazette film critic Marylynn Uricchio noted:  “Buba’s greatest gift has always been to find humor in the most dismal circumstances, and to find hope at every dead end – Buba finds everything that is noble about the human spirit and celebrates it as if it were the most natural thing in the world.”

No Pets has universal appeal, particularly to those interested in filmmaking. Whether studying the film’s content and characters from a sociological or psychological point of view or investigating the numerous elements of filmmaking that makes this work so striking, there is a great deal to be gained from a screening of No Pets.

The screenplay of No Pets is based on Jim Daniel’s short story of the same name. Daniels, the son and grandson of auto workers, was born in the Motor City and raised in the “Buy American City” (Warren, MI). He began writing down what he saw while working summers in the Ford Sterling axle plant and these crumpled, grease-stained notes later became poems.

The high factory wages (now long-gone) put him through college, and the poems landed him a place in the graduate writing program at Bowling Green University, where he received his MFA in 1980. Daniels honed those rough factory poems into a chapbook, On the Line, published in 1980, and on the strength of that small book, he was hired as a poetry instructor at Carnegie Mellon University in 1981.

In 1985 he published his first full-length collection, Places/Everyone, a kind of family album of working-class life, where he called on the experience of all of the jobs he’d had – soda jerk, short order cook, liquor store clerk, bank teller, and warehouse stockboy. Places/Everyone won the Brittingham Prize for Poetry.

What the poet C.K. Williams said of Places/Everyone also goes to the heart of No Pets:  “Daniels has captured the blind and sad anquish of souls so trapped that they have ceased to know how to speak, even to themselves, but he has never lost sight of the remarkable dignity, humor and spiritual resilience which at the end are what redeems our passion and our hope.”

If you wish to purchase a copy for personal use, please visit our online store here: No Pets DVD.